celebrate movember by giving your scrotum a lift 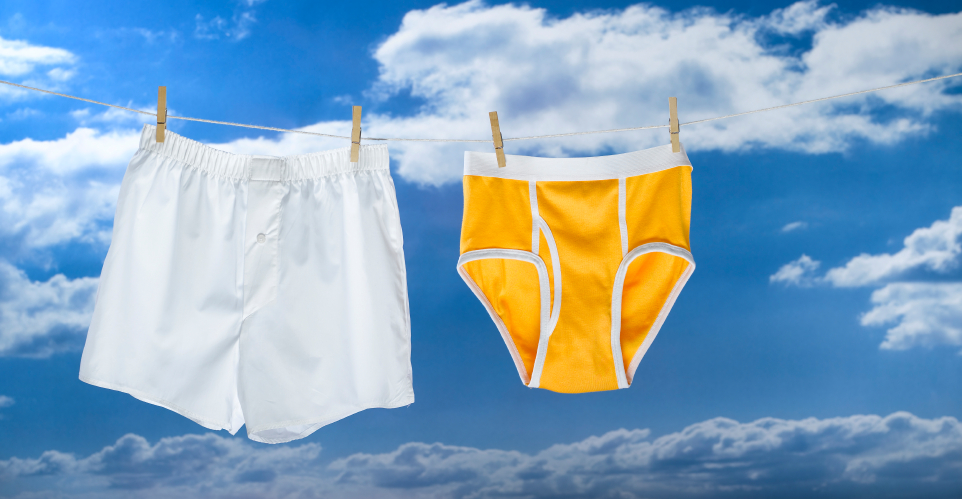 When I was in middle school, boxers were cool and briefs were dorky.  I was a 12 year old, sheltered church girl.  What did I know about men’s underwear?  Well, I knew that my (step) dad wore briefs, and he sometimes (maybe all the time) liked to walk around the house in them.  Since I thought briefs were totally uncool, I naturally associated him with being a dork when he wouldn’t wear normal person clothes at home.

Looking back, I commend him for wearing the healthiest underwear he could wear (good job, Dad!), but I do not commend him for sporting it around the house.  Seeing it in the laundry was enough.

Everyone seems to think that boxer shorts are the healthiest underwear for all men because they keep the scrotum cool, and hence enhance the sperm count.  This widely accepted notion may not be accurate.  A 1998 study that compared scrotal temperatures from boxers and briefs found no scrotal temperature differences between the two.1  Even if there is a tiny temperature increase caused by tighter underwear, it’s not enough of a rise to decrease sperm production in a healthy, fertile male. However, infertile men may have innately higher scrotal temperatures.  For these men, boxers may be beneficial.

Briefs are for men as bras are for women.  However, bras are more cosmetic in function than briefs. There are more health pathologies that can result in a male from not wearing proper underwear support than there are for women not wearing a bra.  Underwear situations that cause the scrotum to dangle excessively can result in chronic, low grade trauma to the scrotum. Longstanding scrotal irritation from going commando or using boxer shorts can lead to epididymitis or the formation of an idiopathic hydrocele.  The same dangling situations also put males at risk for testicular torsion.

A 100% cotton pair of briefs is the healthiest type of men’s underwear.  Synthetic fabrics can trap humidity, whereas cotton is breathable.  The underwear should be snug, but not tight.  If you can’t give up your boxers, boxer-briefs are the gateway skivvies to briefs and are better than no support at all.  Overly tight fitting bikini underwear is not recommended.  Thank God my dad didn’t wear those around the house.

Make Your Own Marshmallow Root Cold Infusion
My belly has not been my friend recently, despite all of the archerfriendly food I have fed it.  I've been sipping marshmallow root cold infusions frequently, in hopes that the slimy liquid will c...
Vitex (Vitex agnus castus)
Using vitex to support chastity is a large part of vitex's rich cultural history, so much so that "chasteberry" and "monk's pepper" are this plant's common names. Traditionally, vitex has been...
8 Baby Making Tips for Future Dads
The way you live your life affects your sperm. Period. It doesn't matter who you are. What food you put down the hatch, what supplements you take, where you store your cell phone, and where you pu...