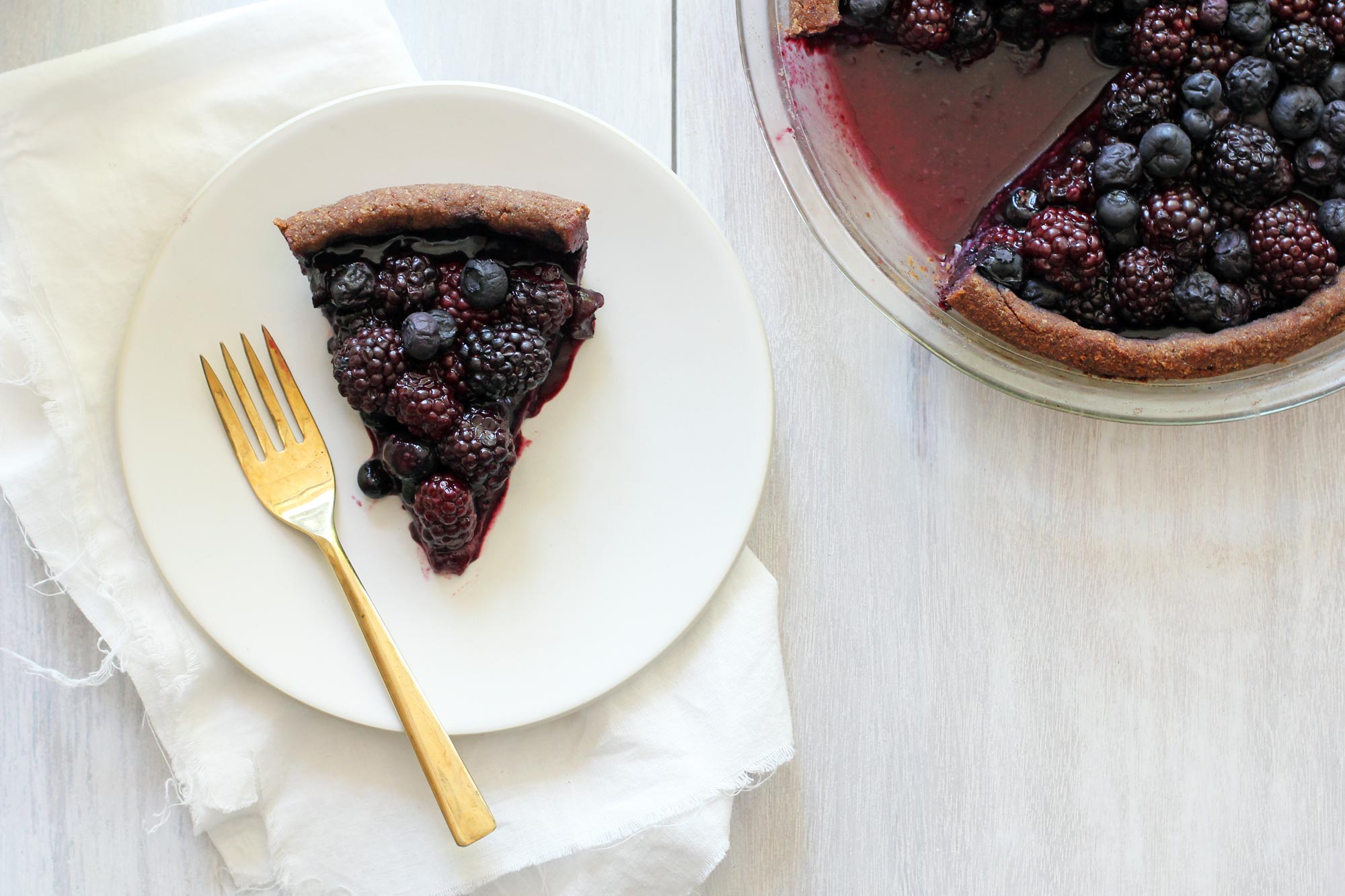 Traditionally, a blueberry blackberry pie contains flour and sugar in the berry filling. I know this because I texted Mama Crow and she told me so. (Mama Crow is what I call my mom because she’s a bit infatuated with crows.) She was the queen of pie baking back in the day, so she knows what she’s talking about.

I also Googled blueberry blackberry pie and investigated how other people were making their normal person berry pies, just to be sure. I wasn’t really looking for ideas on how to make berry pie, since I’ve been using my own made up recipe since 2008. I know that year really matters to you, too. It matters to me because this recipe is older than my daughter.

My berry pie research was for one reason only: I wanted to see if everybody and their mother are putting flour and sugar in their berry pie. And guess what! They are.

That piece was so important to me because I don’t put flour and sugar in my berry pie.

Here’s why: I want the filling as healthy as possible. This means that it needs to be as close to its natural state as possible while also being as blood sugar friendly as possible. The more carbs that go in the filling, the harder it will be on your blood sugar. Flour + Sugar = Carbs. There’s enough carbohydrate in the baked berries and the crust, so I don’t like the idea of adding any more to that.

White sugar is not something I could comfortably stick in my pie. I already have anxiety that I put coconut sugar in my Chocolate Beet Cupcakes (gasp)! I would get psychological problems if I put white sugar in my blueberry blackberry pie. I’d worry about cavities, gum disease, my insulin resistance getting worse, and that I’d be feeding all the SIBO bugs living in my belly. White sugar has zero health benefits and doesn’t make me feel good, so ethically, I can’t even. I want to make food that makes me feel good! That’s why I make food the way I do. 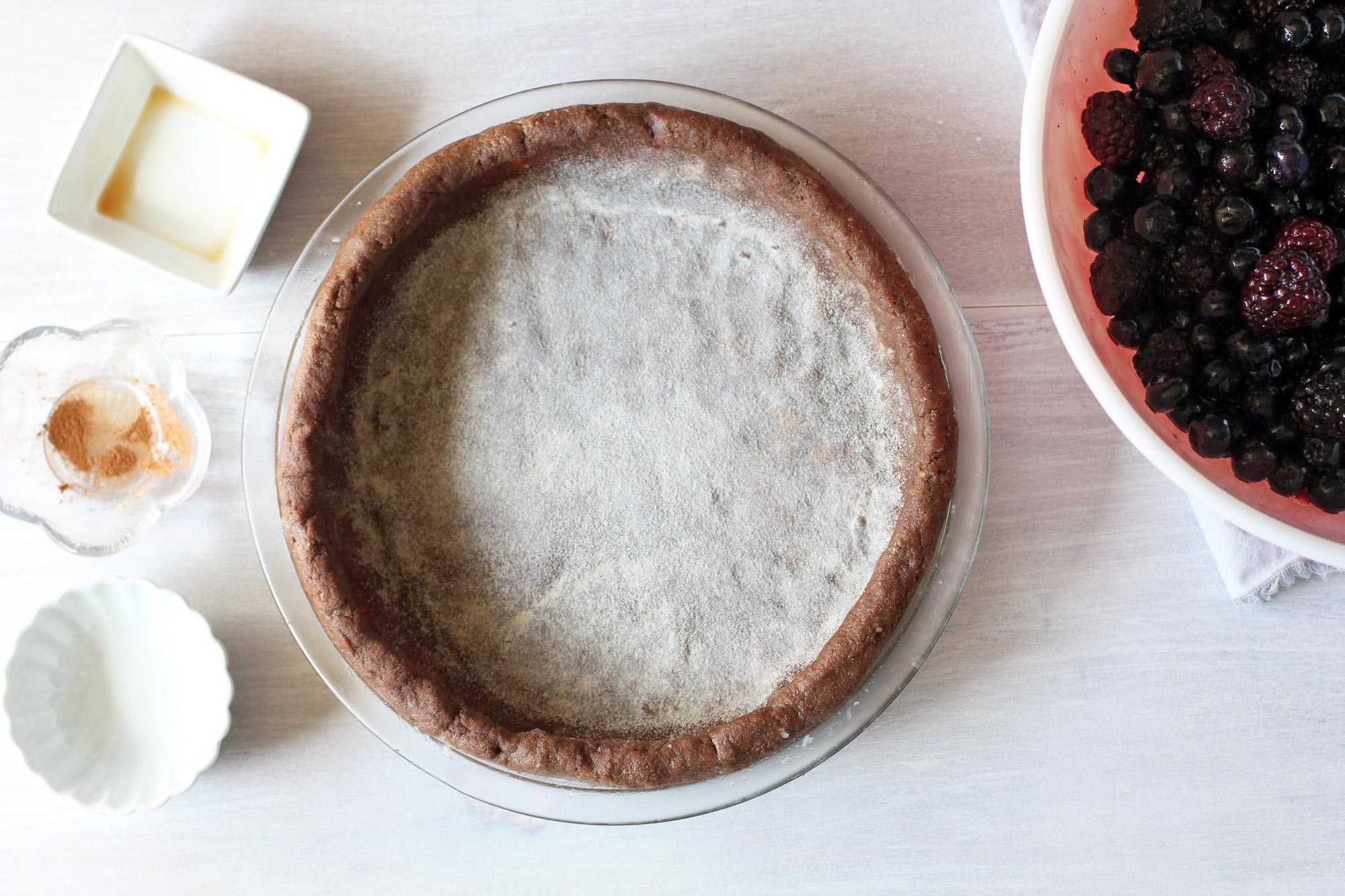 When fruit is baked in the oven, it becomes SWEETER. Which means that the natural fruit sugar content goes up. So why do we dump a whole bunch of sugar in something like that (because that’s how sugar goes in pie… via the “dump” method)?

Everyone and their mother are using flour in their berry pies because it helps absorb liquid and hold everything together. But you don’t need white flour to do the job. You can use tapioca flour or gelatin. The tapioca flour will increase the carbohydrate content of the filling, which is why you want to use the smallest amount that will get the job done. I like gelatin, even though it is not vegan, because it increases the protein content of the filling without adding any carbs. Although I’m allergic to tapioca now, so it’s not an option for me anymore. 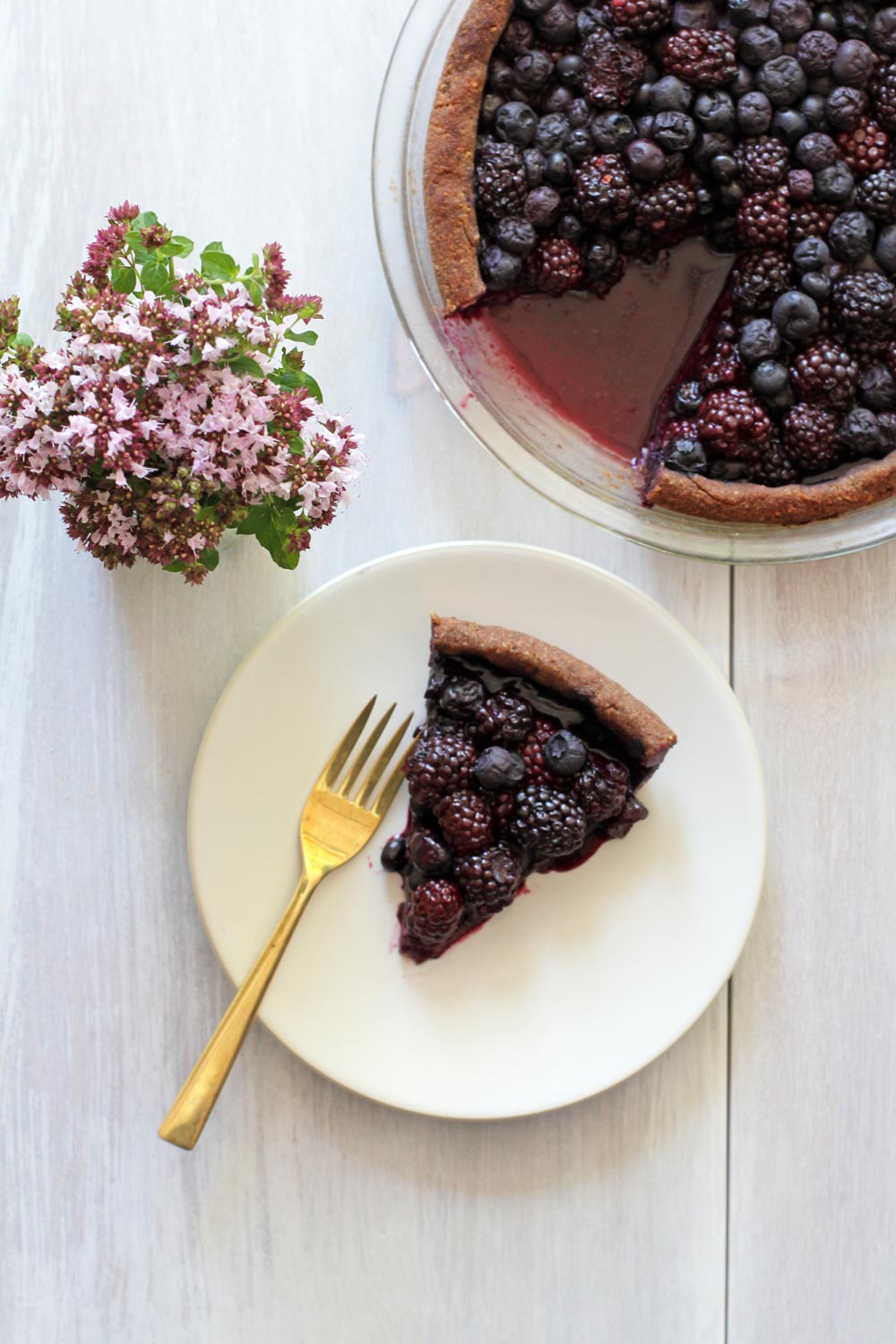 Frozen berries work best when you’re trying to make a berry pie without the use of high carb fillers. Frozen berries will increase the liquid content of the pie, which helps to congeal things naturally. I test ran a pie using fresh berries, and the filling didn’t hold together as well as it did when I used frozen berries. Blueberries are naturally high in pectin, which also contributes to the congeal factor in the berry filling.

Pressing the homemade pie crust into the pie plate by hand is the most intense part of making this pie. The pie dough itself is made in a food processor, which is easy, but then there’s that part where you have to clean the food processor afterwards (I dislike cleaning my food processor). The blueberry blackberry filling is the easiest part.

As a doctor, this is a dessert I can get behind.

These are the kind of desserts I want you to be eating — simple, sugar free, sweetened with stevia only (or no sweetener if you hate stevia — that’s OK too), and made with whole food ingredients. We don’t need sugar in our desserts. Now, don’t feel like you need to hide all your sugar containing food if I visit your house. I have had this happen before. I’m not judging you for your sugar intake, really I’m not. Have you seen all the ice cream I ate last summer!? (I’ve majorly decreased my ice cream intake this summer because I have SIBO and I’m not touring Pennsylvania like I did last summer.)

My girls love this pie and so do I. I ran through three test versions of it before posting it here. My older daughter said, “Mom, please do not stop making this pie!”. I won’t. This recipe is easily one of my favorite archerfriendly foods. 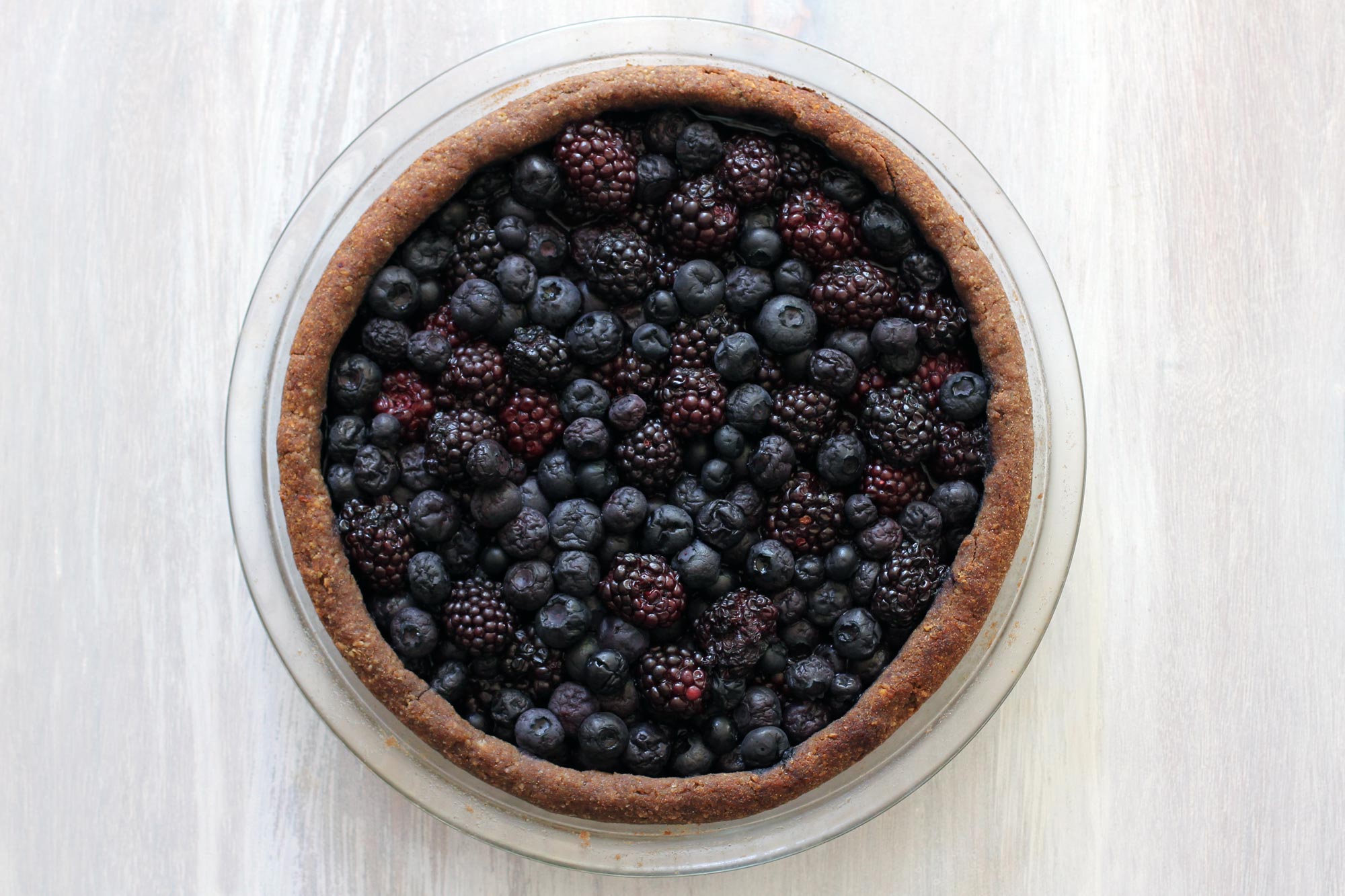 1 For the liquid stevia, err on the lesser side, especially if you are not used to stevia. I’ve become accustomed to the taste so I prefer 1/2 teaspoon, but this may be too much for many people.
2 I like Knox gelatin even though it is not grass-fed nor organic. It works better for me, and I usually need less of it for the same effect.

Dairy Free & Sugar Free Peanut Butter Fudge
Finding food to eat in emergency situations can be very difficult.  In 2011, I made this sugar free peanut butter fudge for a Christmas Eve gathering with some Seattle friends.  Two days later, th...
Cardamom & Date Sweetened Black Bean Brownies
I was tempted to sneak "phytoestrogen" in the title of this fudgy legume treat, mainly because I'm the weird food lady and it looks like I caught the tail end of the black bean brownie band wagon ...
Tom Kha Gai Soup
This is the no fuss archerfriendly version of Tom Kha Gai Soup, currently my hands-down favorite soup.  The traditional version is made from scratch with bird's eye chilies, fresh lemongrass, gala...