Your Body Does Not Need Any More Candy
0

my real dad, my step dad, and my pretend dad

I was shushed from sharing my story for too many years, and now I’m all about the sharing and not about the shushing. I like sharing my story with you because I want you to know me. I also want my story to speak of what can be overcome. Decades of grief can begin to heal after crying all night and all day for 72 consecutive hours. A whole, healthy life is completely possible after years of irreparable destruction.

Today, you’ll briefly learn about my three dads: Pappy, Dad, and the Coors Light Drinker. Hopefully this will help you follow my story when I talk about it in future posts.

Pappy is my biological father. He lives in the boondocks of Pennsylvania, calls the wash “worsh”, and plays the piano every Sunday in a quaint, hymn singing Presbyterian church. Pappy wanted to be called pappy. We called Pappy’s dad, our grandfather, Grandpappy, and we called our great grandfather Papel. Pappy and my mom were married and had three girls together, and I was the middle one. They divorced when I was 4, and I didn’t see him again until I was in the 3rd grade. 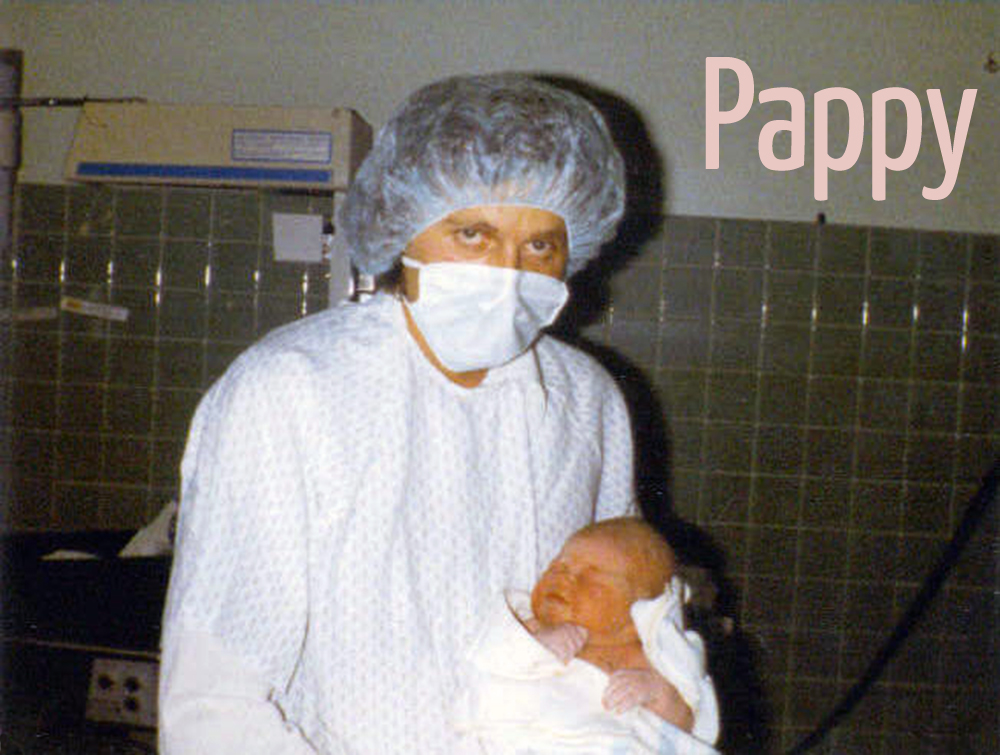 When my sisters and I got re-acquainted with Pappy, we learned all about his mobile hair techniques. He had a special car method for combing his curly mullet and then spraying it from his pink Salon Selectives pump hair spray bottle that he kept in the glove compartment at all times. He did this hair routine prior to entering any kind of establishment – movie theaters, gas stations, restaurants, just in case he met a lady friend. He doesn’t have his curly mullet anymore, and I kind of miss it (but I don’t miss getting the Salon Selectives over spray in the back seat).

I’m in regular contact with Paps (what I like to call him now), although if you ask him, he’ll probably tell you that I don’t call him enough. 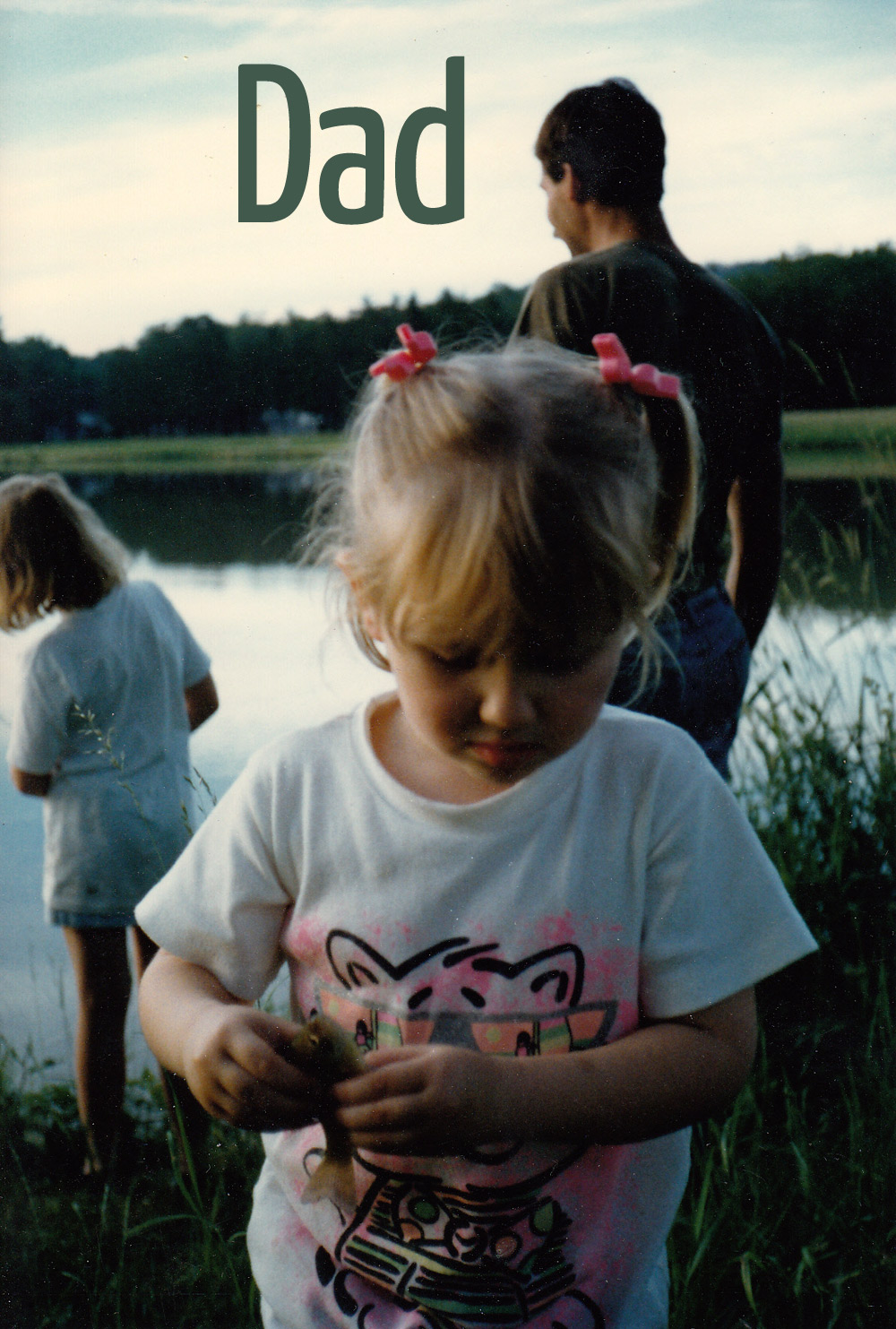 I met my future step-dad when I was four, and he automatically became “Dad” to my sisters and I. My mom married him when I was in the second grade and we lived with him as “dad” until my mom divorced him when I was 16. This means that he was my at-home dad from kindergarten through the beginning of my junior year of high school. He watched me transform from a preschooler into a high schooler.

Dad had his own business, and was the engineer type who thrived on perfection and strict rules. Naturally, he was a workaholic who put in 80 hour weeks, every single week. He worked 12 hour days on Saturdays and Sundays. Christmas Day might have been the only day he didn’t work out of the entire year. He wasn’t around much, but I liked him anyways.

My mom and dad divorced during the fall of my junior year of high school. I’ve only seen him a handful of times since the divorce. He went on to marry a Ukranian woman, and now has 3 little girls of his own.

You can read more about our relationship when I talked about Re’uth’s birth.

My Dad also has a mom, whom I call Grandma Ruth. I talk a little bit about her here.

It was my mom who made the Coors Light Drinker into this glorious dad of mine, just weeks after she met him. He was an uncle to my cousins and his two kids were referred to as my sister and brother. I coped and still cope with the situation by saying that my mom liked to play pretend, but in reality, she wasn’t pretending. She was for real. I had to sign father’s day cards for him, and use the dad word, even though he deserved a grocery bag full of vomit.

As his name implies, he liked to drink a lot of… Coors Light. If you were lucky to ride in the car with him while he drove, you might wonder what he’d do with his open can of Coors Light if a police officer pulled him over. Maybe it didn’t phase him because he already had a few DUIs under his belt before he met my mom. Longer road trips meant packing the insulated Coors Light cooler.

My mom never married the Coors Light Drinker, but they were together for 11 years. He died in 2011 from a carbon monoxide accident. When a family friend found out about his death, she kept saying over and over, “Thank fucking God!”. This was her unfiltered but honest expression of thanks to God for the freedom my mom found the moment he died.

What We Spent on Supplements in 2013
"We spent $500 on quercetin last year?!!!" I cautiously asked the Wendy's Eating Husband to tally up all of our supplement expenses in 2013. He did not like the results. Too bad for him, becaus...
Your Body Does Not Need Any More Candy
Halloween is over, and so is its candy. If you still have Halloween candy lingering about the house, it's time to dispose. Your kids don't need it anymore and neither do you. Don't take it to work...
Longing for the Past Can Be a Symptom of Unhealed Grief
Up until about a month ago, I wore my little sister's salmon colored American Eagle hoodie that she wore in middle school. My little sister wore this sweatshirt before my mom and step-dad divorced...
By Archer Atkins
▲
UP