Hiking Through Fear and Forgiveness 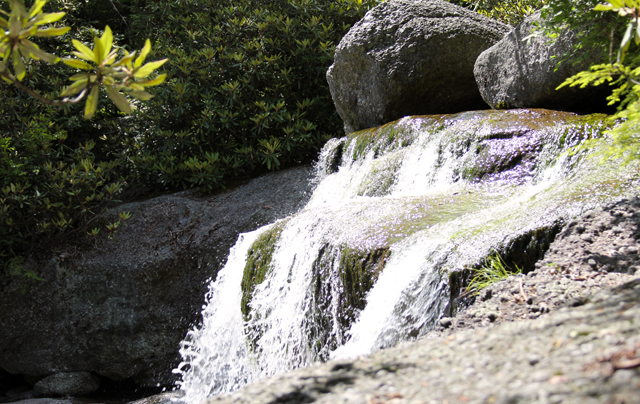 My husband, 3 year old, 10 month old baby, and I were driving with my mom on a steep, Pennsylvanian coal mountain road to the trail head of “The Falls” (hear me say that with my eyes bugged out every time you see it in quotes), which was a hike that led to a beautiful secret waterfall at the end.  We were in from Seattle, visiting my mom on her turf in the coal mining bush.  We wanted to go on a hike with her because somebody I know really wanted to obtain some east coast herb pictures for her blog… and my mom loves hiking.  We specifically requested for our maternal hiking guide to find a kid friendly hike.

I should have known better because my mom had been talking about “The Falls” (remember about the eyes, last reminder) for the past 6 months.  She was so entranced by this hush-hush back bush hiking spot, that she forgot what “kid friendly” meant.  Surely “The Falls” was a popular kiddie hiking spot, with trail markings, parking spots, and a manicured path for our jogging stroller.

“Look at the gun range!”, my mom said, before she informed us that the starting point for our hike was right up the road.  The sound of her voice was muddled with countless shots firing in the background.  To the right of the road was an expansive shooting range with many active participants firing away from what looked like an outdoor bachelor poker party set up on rustic wooden spools and wobbly card tables.  She was particularly fascinated by the poker paraphernalia in the bramble.  I was not fascinated.

There was no official parking spot for my husband’s parents’ borrowed car.  We simply pulled into the gravel off the side of the narrow coal country road.  As we got out of the car, the gun shots sounded louder than ever and I felt like a German Shephard with ears sticking straight-up, in total defense mode.  The words, “kid friendly hike” were running through my mind when I saw countless empty shell casings littering the ground.  The gunshots sounded as if there was a little militia waiting in the woods to take me out.  My mom kindly reminded me that they were “firing in the opposite direction.”

In the gravel on the side of the road, my mom smothered herself in bug spray for “the ticks”, while I cautiously read the sign at the gated entrance: “Private Property.”  A moment later, an official Pennsylvania DCNR truck pulled into the gravel, and my first thought was that we better scat before we got arrested.  While visions of baby handcuffs were flashing in red across my eyes, my brain scrambled for the words I would use to explain to the official how I got in this predicament with my 10 month old baby and 3 year old daughter.  “Seattle, I’ll just tell him we’re from Seattle.”

The official DCNR representative was an outdoor teddy bear kind of guy and didn’t say a thing about what looked like our intentions to trek on private property, jogging stroller and all.  He was actually looking for another private property hiking spot, to which my mom proudly delivered the directions.

A few minutes into the hike, my mom announced that she had the “bear mace” because there were “lots of bears” that lived by “The Falls”.  What were we going to do, had we seen a bear, with a 3 year old girl and 10 month old baby?  Don’t worry about it!  Grammy’s got BEAR MACE.  Not that spraying that would intoxicate my kids or anything…

About a half mile into the hike, my mom quickened her steps to get ahead.  After I asked her what she was doing, she informed us that she was “watching out for rattlesnakes”.

This was not my idea of a kid friendly hike.  It was not a baby friendly hike.  At one point the terrain was so rigorous that we had to abandon our jogging stroller (that of which I was afraid the secret militia hiding in the woods was going to take!). 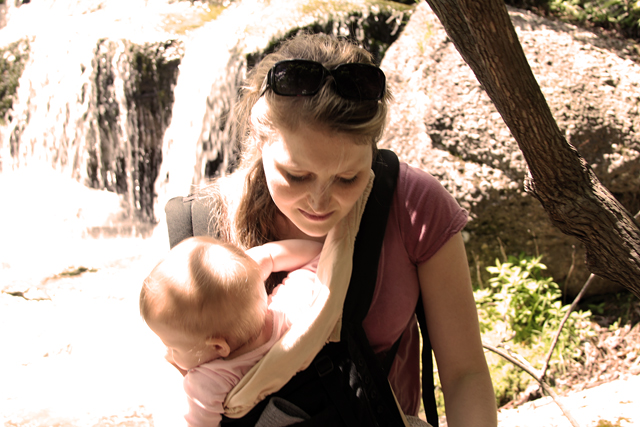 During this arduously unpredictable hike, I thought about the last time I went on a hike with my mom.  It had been almost 7 years ago.  The Coors Light Drinker was there, along with his deceptive globe like eyes that were always glossed over and blood shot.  He used nice words with me, but I knew how he really liked to talk because I heard it when I had pressed my ear to the wood of their bedroom door.  I pretended to like him and his fake-but-friendly salesman laugh.  He pretended to like my mom, and everyone knew that except for her.

I couldn’t help but think about these things as we walked the rocky, ungroomed trail.  It was the first time in 11 years that I could talk to her without him being there.  There were many opportunities for the thousands of questions I have had, but it wasn’t time to ask them yet. The hope of life for her and for us without him along, it grew supernatural strength in me to endure my fear of the guns, the ticks, the private property, the bears, and the snakes.  I could trust her leading the way, only because forgiveness trail blazed my heart for the soul screaming mess of a life that happened when he was around.  Hope has taken his place.

Where has hope given you strength to face your fears?  How has forgiveness helped you to trust again?

Recovering Bulldozers, Think Sailboat
Calling out the bulldozer in my heart, and naming it as such, has multiplied my self-awareness for how often this reckless piece of machinery ignites its engine and humms "Grrrr" to so many people...
Scaredy Cat Brownies
If Jesus found out that I was celebrating Halloween by making these Scaredy Cat Brownies, He might come down from the sky like a spaceman, pick up His followers, and leave me behind. Maybe not, bu...
Checklist (and Costs) for Becoming a Naturopathic Doctor in Washington State
A month after I married the Wendy's Eating Husband, we road tripped across the good ole' U.S.A. as part of our cross country move from Pennsylvania to Seattle. We were moving to Seattle so that I ...