How to Make Golden Milk Syrup

Made with only three ingredients: fresh turmeric root, honey, and black pepper 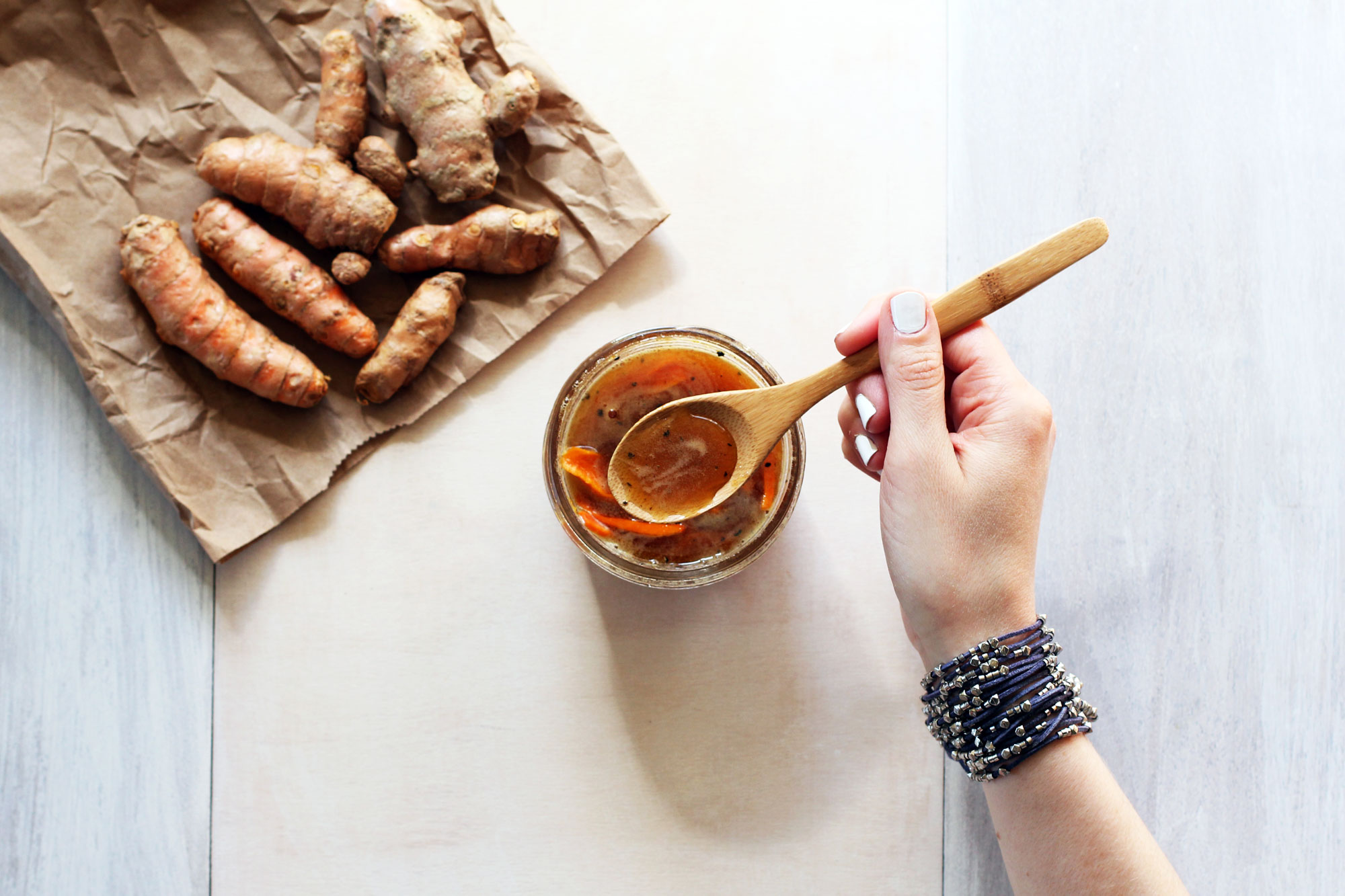 For those who have been living in La La Land and DON’T know what Golden Milk is, like the guy I talked to in the sauna last week, golden milk is the charming term for turmeric infused milk. You could call it turmeric milk, but that is so much more of a mouthful. Some call it Golden Mylk to indicate that it is made with cow-free, plant-based milk. So, turmeric + milk/mylk = golden milk. 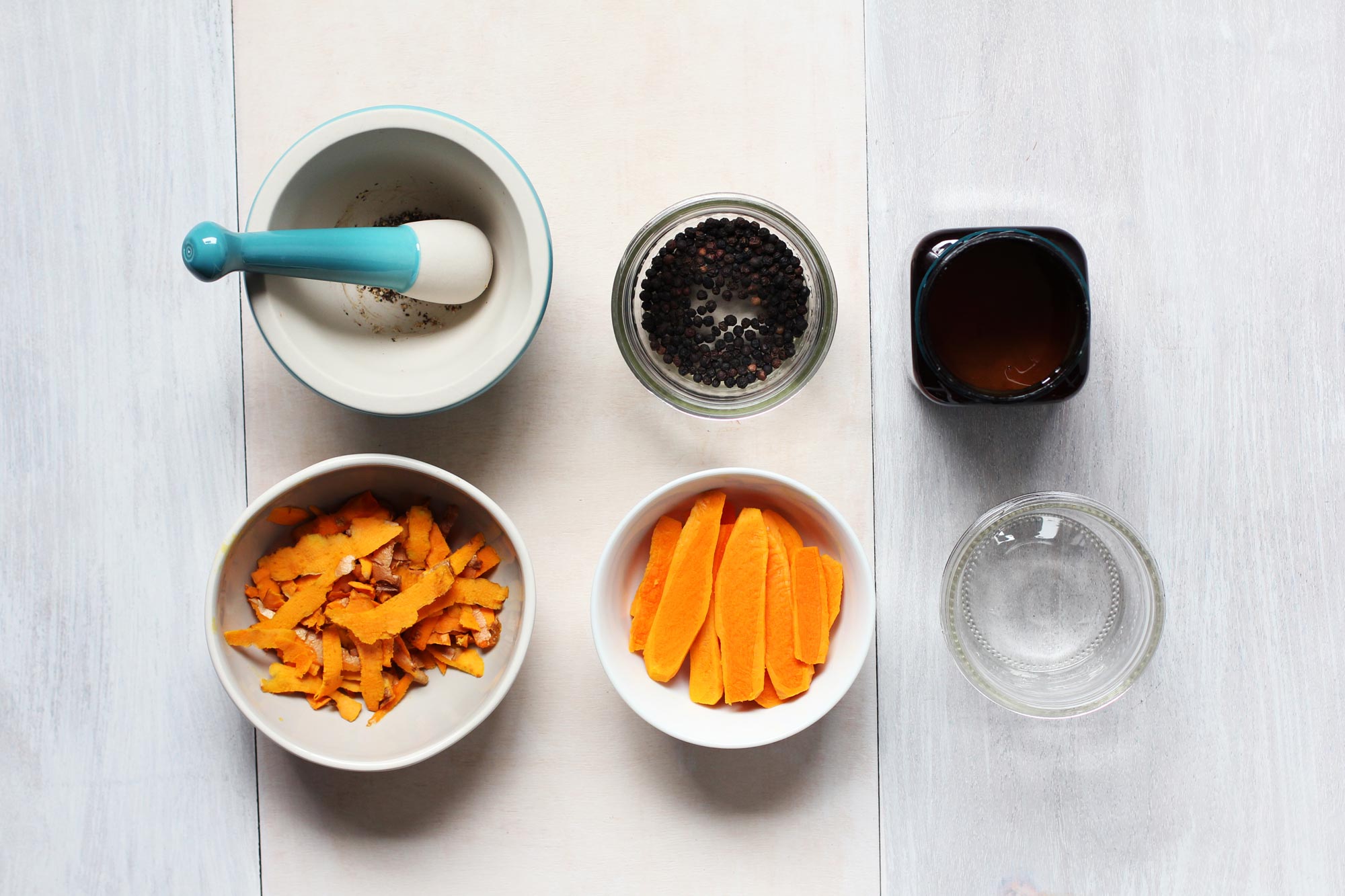 There is a reason for all this golden milk c-r-a-z-e. Turmeric isn’t just a trendy superfood. I prescribe turmeric for patients in my practice, and I take it myself on a daily basis. Turmeric is a substantial source of antioxidants, which why it serves up a strong anti-inflammatory effect in the body. It can also help to protect the mitochondria (a lot of things in this world damage mitochondria; fluoroquinolones being one of them… and if that long word doesn’t ring a bell think Cipro). Why wouldn’t you want to eat this stuff!? I want turmeric in every single thing I eat! 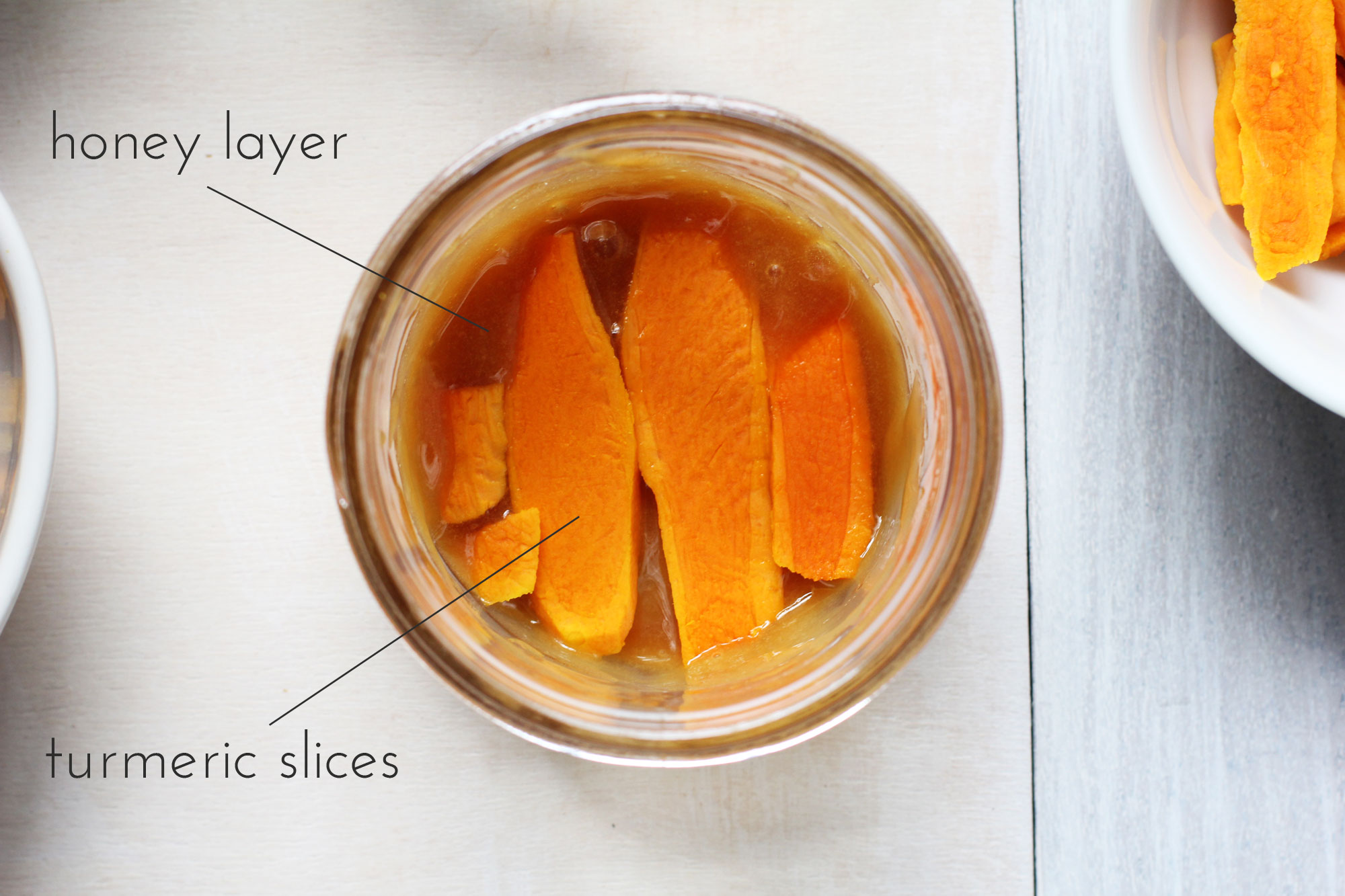 I like to stick it in iced coffee. That turmeric and coffee flavor, it just goes! I can’t get enough of it. In fact, you need to make this Golden Milk Syrup, solely for the purpose of making Golden Milk Iced Coffee. If I had a cafe… 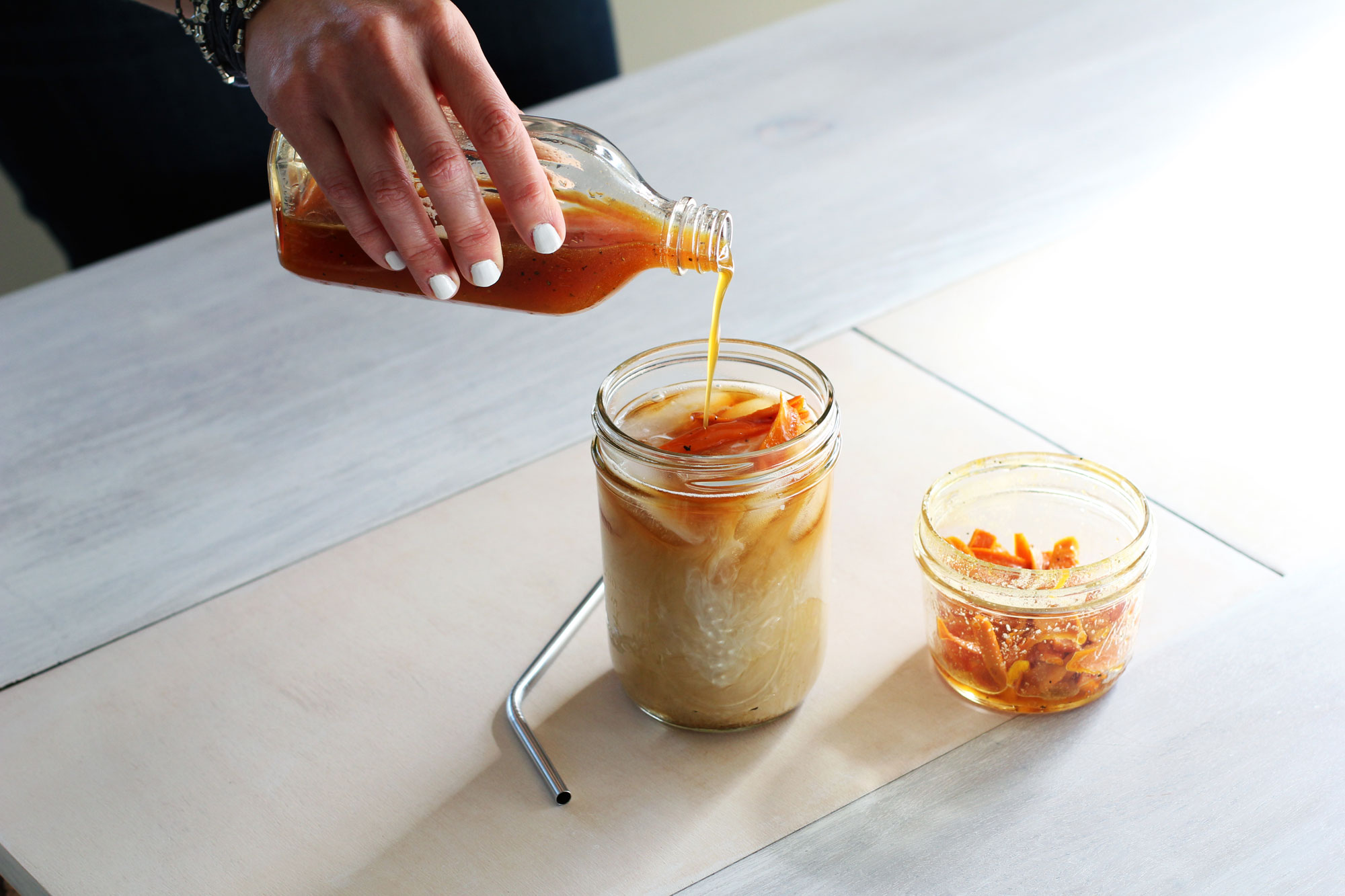 Using this golden milk syrup is so much less of a fuss than dried turmeric powder. No yellow powdery hot mess! I’d much rather have something that will easily blend into my drink without yellow powder floating to the top. But, even then, that would never stop me because I don’t have texture issues like the Wendy’s Eating Husband does.  The powdery situation with ground turmeric powder in most golden milk recipes would be a no-go for him.

That’s why a syrup version totally wins. No whisking, shaking, or blending. The downside of the syrup version is the sweetener. Gotta be careful with not over-doing any kind of sweetener in our everyday life. I normally don’t eat sweetener on a daily basis, so getting to put some Golden Milk Syrup in my iced coffee feels like a luxurious dessert. Besides, this syrup is MEDICINAL. So, no hard feelings there. 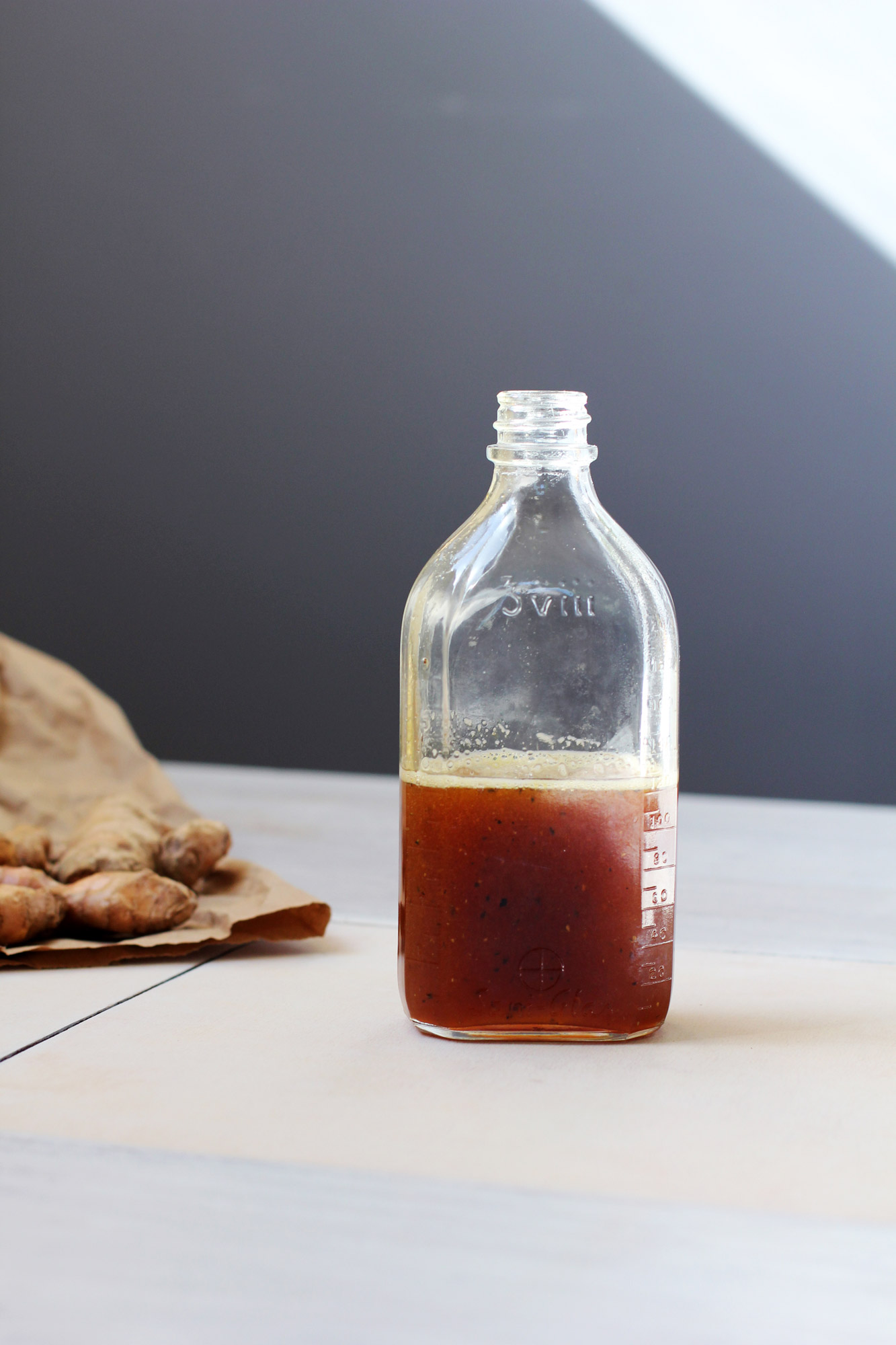 I put 10 peppercorns in my syrup. You don’t need a lot. You can use less. This might be too peppery for some.

The syrup is made via a fresh turmeric root extraction, with manuka honey acting as a solvent. This is the same herbal medicine making process I use for my DIY Onion Cough Syrup. Once your syrup is done macerating, it will have more of a liquid-y texture. That’s how it is supposed to be. The final syrup consistency is due to diffusion.

I prefer to use manuka honey but regular honey will do. Manuka honey has way more therapeutic properties than regular honey, so it makes the final product more medicinal.

The convenient thing about this recipe is that it is not exact. All you need to know is how to make it, and then you’re all set. Fresh turmeric root is peeled and thinly sliced, then smothered in honey. Sprinkle in some black pepper, cover with more honey, and you can call it good.

Not for children under 1 year of age

Video: Six Natural Supplements to Help Your Kids Better Tolerate Vaccines
If I snoozed in my movie theater seat during the premiere of the first Harry Potter movie, you can imagine how short my attention span must be when it comes to "learning" videos. It's difficult for me...
8 Tips for a Successful Toddler Blood Draw
Last week, my 3 year old daughter needed her blood drawn in order to run some laboratory tests. Because my first childhood needle experience was more like a horror scene with 4 nurses, a doctor, a...
Blue Flag (Iris versicolor)
Whenever I work on these herb of the month articles, I end up all googly eyed over the particular herb.  This month, I'm swooning for blue flag, known botanically by it's beautiful latin name,...