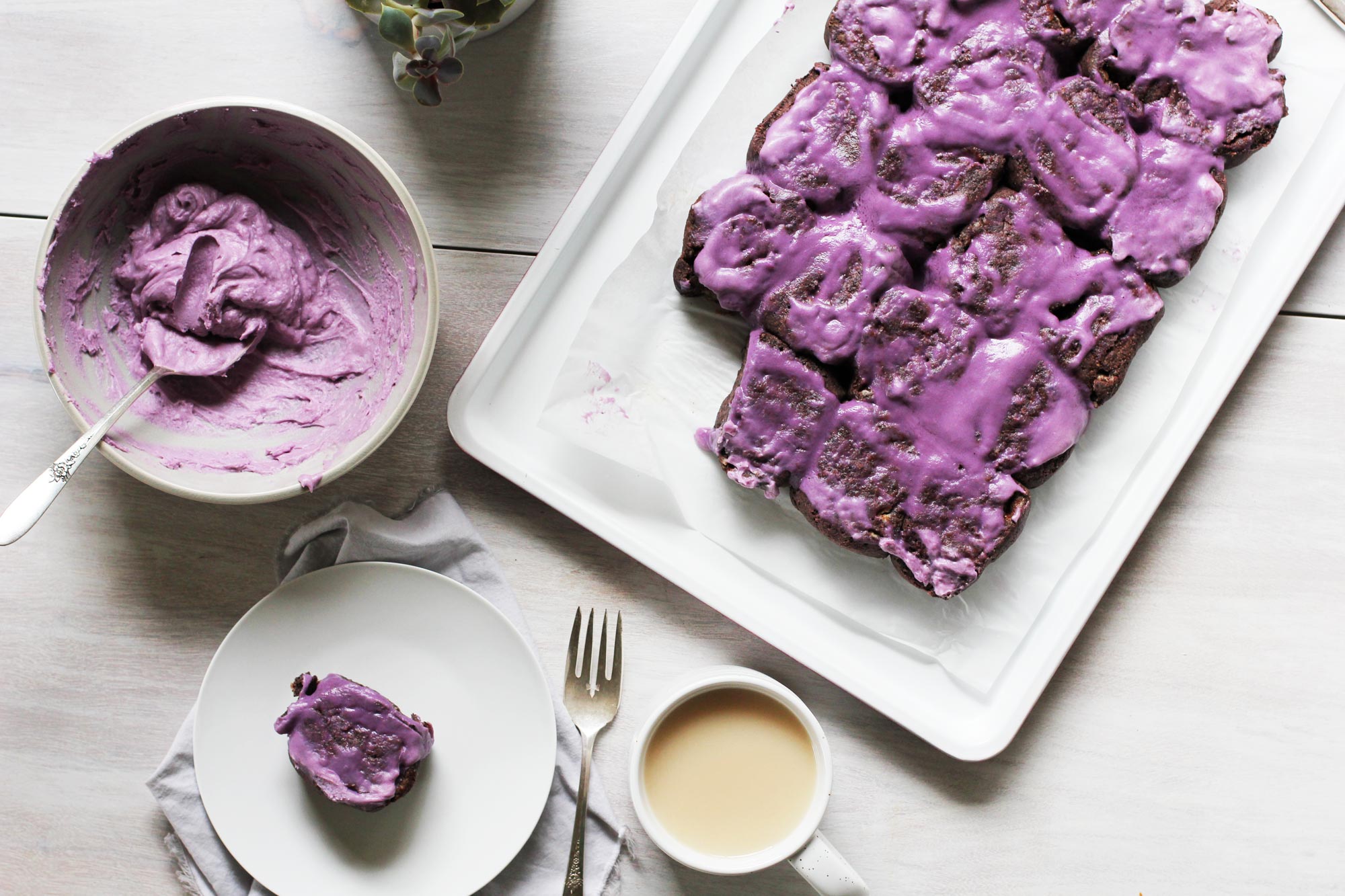 I can’t buy archerfriendly cinnamon rolls. That leaves me with two choices: never eat them or make them myself. I choose the latter! 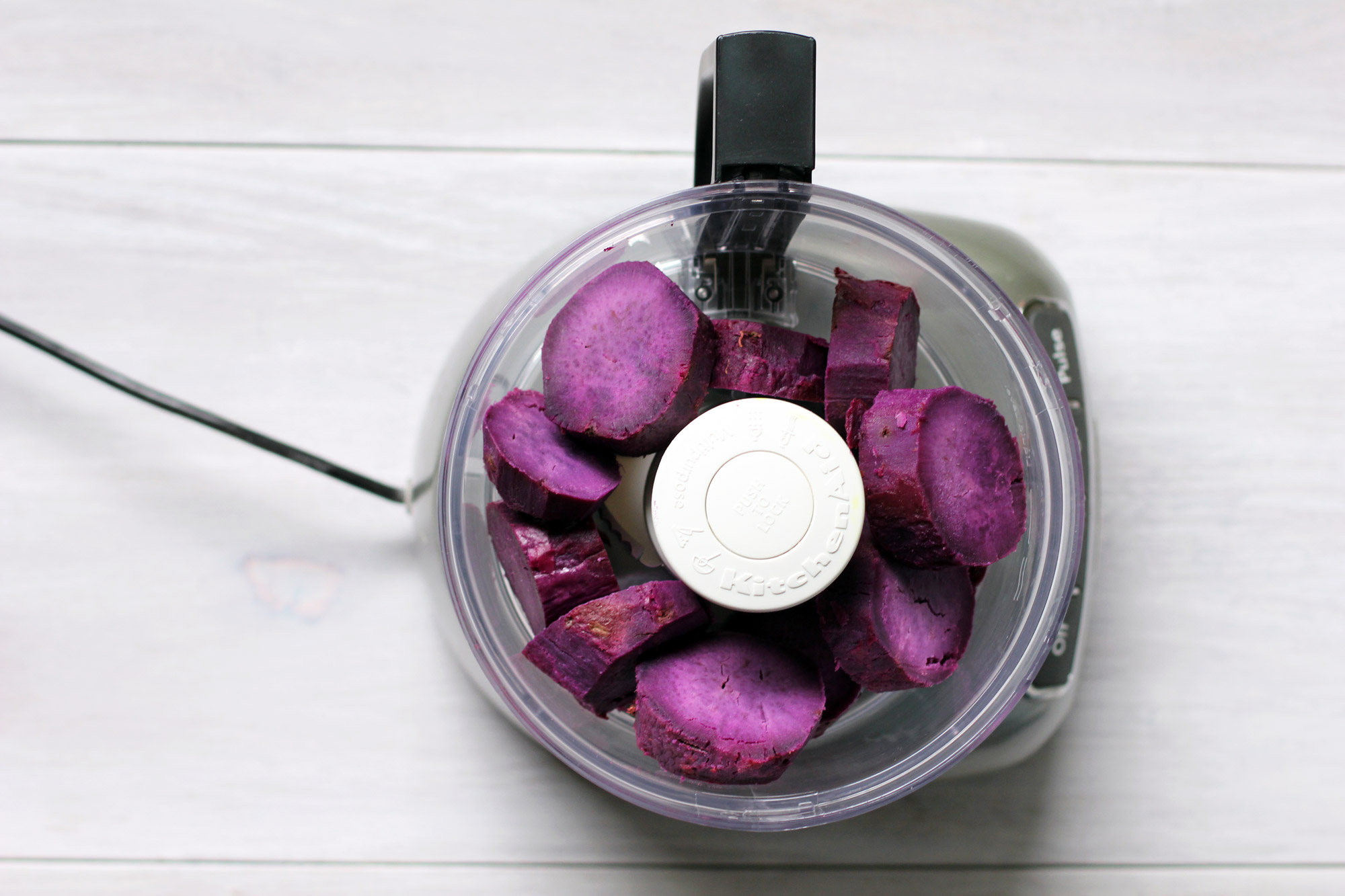 Making homemade cinnamon rolls that are gluten-free, dairy-free, egg-free, soy-free, tapioca-free, nut-free, blood sugar friendly, minimally sweetened, and whole foods based, ALL FROM SCRATCH, is no easy task. Do you know what that means? BEING IN THE KITCHEN ALL DAY. The Wendy’s Eating Husband says it’s not worth it. Maybe because he “can” go anywhere and buy a cinnamon roll to enjoy (I say “can” because he doesn’t necessarily follow his prescribed gluten-free diet). 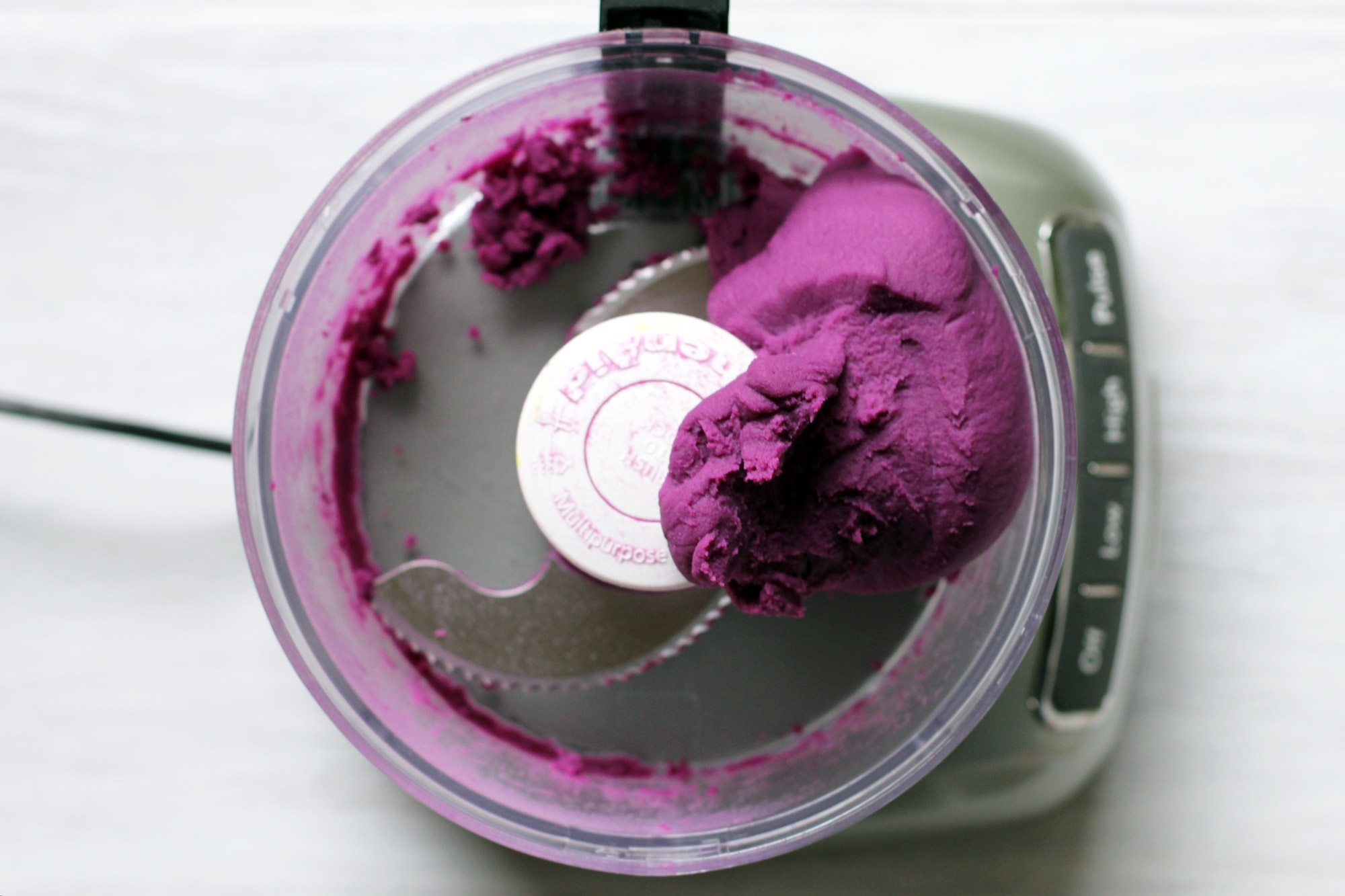 One of the huge reasons I wish I had my own cafe is to save you from all this work! Then you could buy these healthy cinnamon rolls without having to make them. You wouldn’t have to spend your whole Sunday grinding flour and pureeing purple yams for cinnamon rolls your Wendy’s eating husband won’t like. 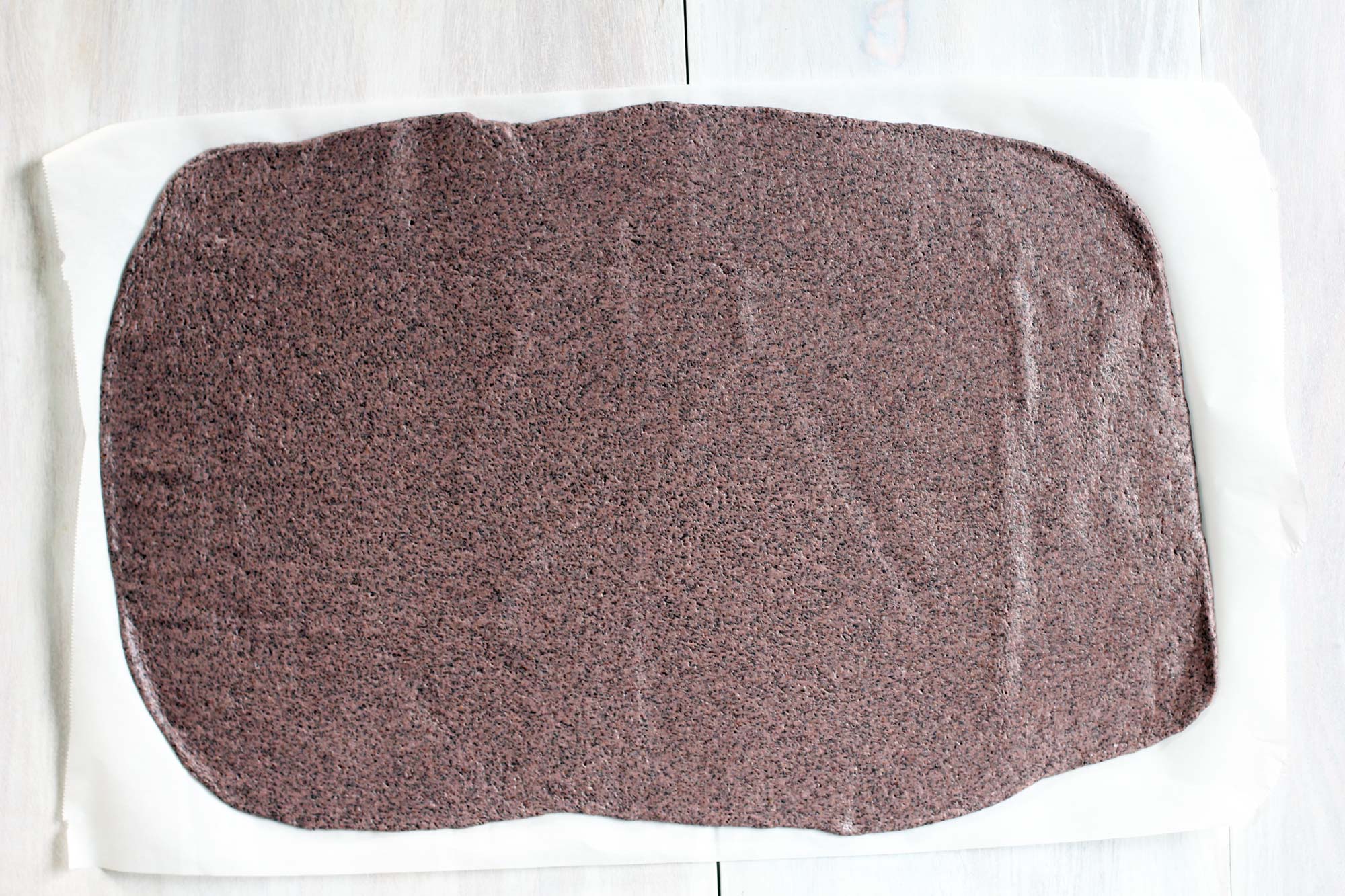 This recipe is labor intensive and time consuming — it’s probably the most intense recipe on the blog! Scroll down and look how long the directions are… 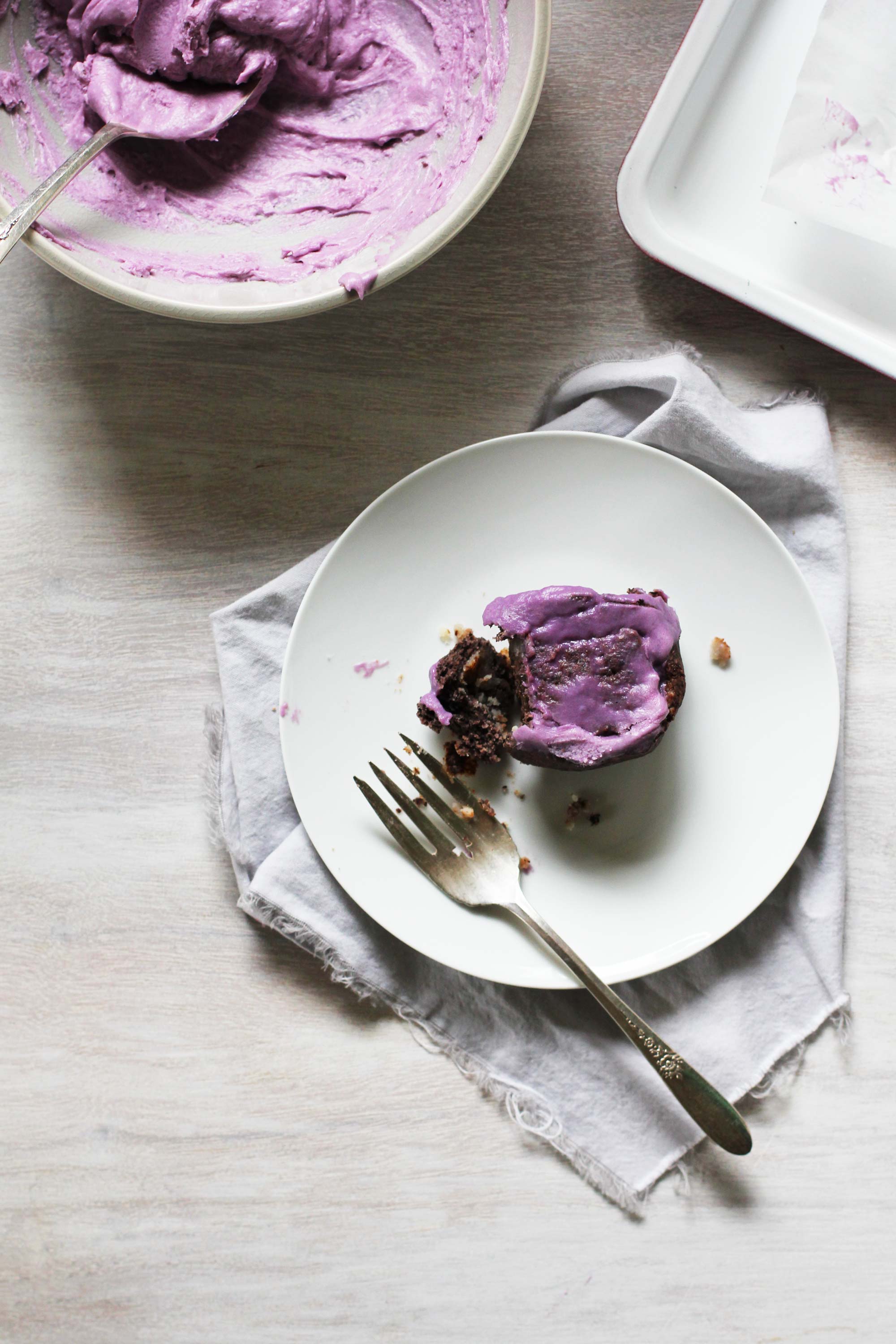 The work is 100% worth it to me because I LOVE these cinnamon rolls and they do not bother my blood sugar.

I CAN EAT THEM FOR BREAKFAST. PLAIN. BY THEMSELVES.

What’s the big deal about that?

I focus on low carb, high protein breakfasts to keep my blood sugar stable, which is why it’s a MIRACLE that these cinnamon rolls don’t give me any blood sugar issues. Maybe it’s not so miraculous, since a cup of buckwheat flour has about 16 grams of protein and 12 grams of fiber! I also minimized the sweetener as much as possible. There’s only one tablespoon of maple syrup in both the dough and the frosting, and then there are 3 tablespoons of coconut sugar in the cinnamon filling. There is some stevia in the recipe and the purple yam brings it’s own natural sweetness to the game.

As you know, I’m a huge advocate for the unsweetened lifestyle, which means sweetening food as minimally as possible. However, many people are not used to this! If you are dying to make these cinnamon rolls, and you’re not as hardcore as I am, there’s an option for the frosting to be sweeter for you — you can use maple syrup in place of the coconut milk. You can also generously sprinkle the cinnamon rolls with coconut sugar before putting them in the oven. I haven’t tried this, but you could potentially use maple syrup in place of some of the full fat coconut milk in the dough.

Both my kids and friends enjoy these cinnamon rolls warmed, with maple syrup poured right on top of them. I of course, enjoy them just as they are! I even enjoy them cold, although they are firmer when cold due to all of the coconut oil in them. They have more like a biscuit-y texture when cold. When warm, they are PERFECT. 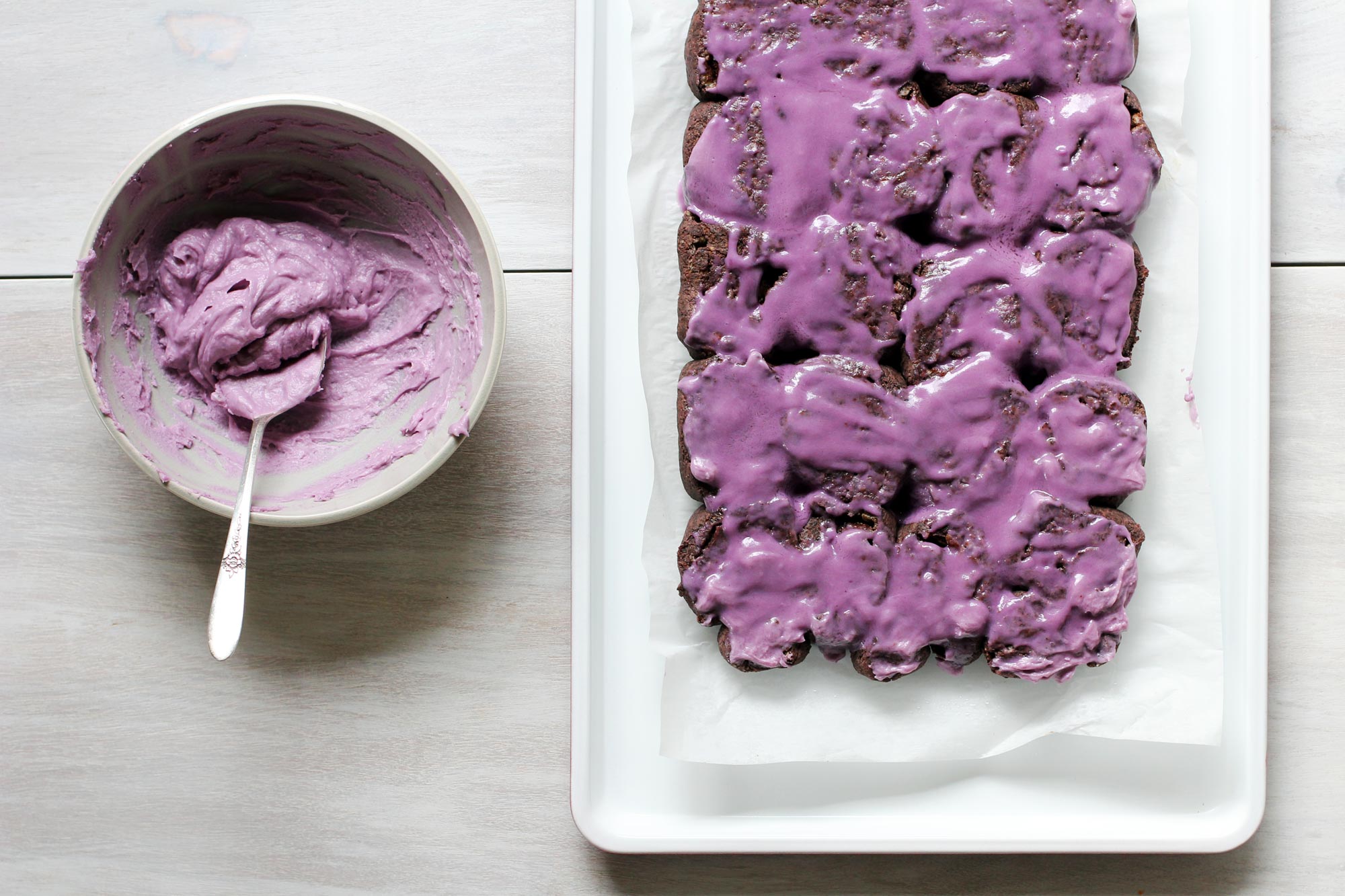 Purple Yam Puree
Highly recommend getting this ready the day before you make the cinnamon rolls.

Purple Yam Frosting
Highly recommend making this immediately after you puree the purple yams to save time on clean-up (then you won’t have to clean the food processor twice).

Buckwheat Cinnamon Roll Dough
If you are grinding your own buckwheat flour like I do in my Dry Vitamix container, I recommend doing all the grinding the day before you make the cinnamon rolls.

Notes on Rolling the Dough

Using Pears as a Sugar Substitute
I am a huge advocate of the unsweetened life. While I fully support a sugar-free lifestyle, eliminating white sugar isn't enough. Maple syrup, molasses, honey, coconut sugar, agave syrup, and e...
Roasted Balsamic Strawberry Ice Cream
Today's blog therapy session begins with a confession and ends with homemade ice cream. I like to waste no time when it comes to getting things off my chest. I really want this one off my chest...
Beth's Mini Gingerbread Men
If you eat normal, you may mistake these gluten-free gingerbread men as holiday dog biscuits, because they kind of look like those natural, homemade dog treats you see at the local farmer's market...
By Archer Atkins
▲
UP